Black and plastic and completely full 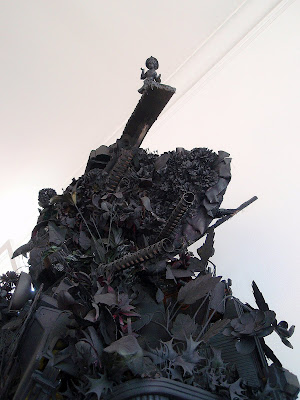 Flowers, chairs, ducks, angels, soldiers, spatulas, spoons, candles, dogs, soccer players, eggs, horses, sheep, alphabet letters, screws, dinosaurs, a minotaur, sheep, sticks, apples, shingles, springs, frogs, birds. These are some of the things you will find in Andrew Norton Webber’s artworks. All stuck together; all painted black.The Columbia artist gathers materials – mostly plastic crap, mostly toys – and attaches one thing to another to another to another in a rather amazing way.One can read much into the work. Is it about the end of the world, when everything is burned? A kind of mourning for what we’ve done to the environment. To kids? Our culture? 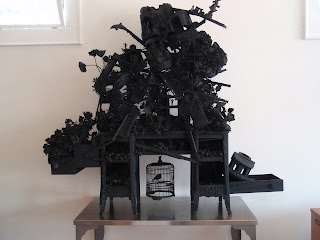 Is it a formal exercise in making something beautiful from a bunch of junk? A metaphorical blacking out of the stuff that pollutes our land and minds. Or is it just something really cool looking?All of the above and probably a few more, although the list might not be as long as the actual objects used.Webber is an artist one doesn’t see that much of. He’s often on the road at the big high-end arts festival held in Florida and Colorado and California. WhileWebber has won a number of awards at these shows, his dark work isn’t the sort of thing that sells to folks looking for more decorative, but quality art for their homes – or their second homes or third homes. (He’s mainly there working with his partner the painter Suzy Scarborough who sells very well at the shows.)Webber rarely shows in Columbia where he lives, so his exhibition, with the sculptor Robin Jones, at Compass 5 Partners architects in Cayce is a welcome event.In the past Webber’s sculptures have mostly been small, but some of the new pieces have gotten almost gigantic.One is made of a dresser topped with a pile of junk as high as the piece of furniture itself. It’s about six feet tall. 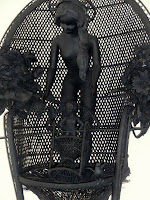 The majority are approximately three-by-three feet in size – still twice as big as the work he was doing a few years ago. Each piece is also nearly as deep as they are wide and a few have extensions that cantilever out from the main body of the sculpture. They really hold up in this new size – just as well constructed, just as visually interesting, just as content-laden.

Webber’s art has a quality that’s called horror vaccui in which every available space is filled. That’s one of the appeals of it. But he shows that he doesn’t need all that stuff to make good work.

A rare spare work, titled “Air Box,” is mostly a few sticks and some fencing with a small dolphin floating in the center. Another that’s much simpler is made from a small table soccer game – painted black of course, called “Word from Your Mother.”

Webber’s art provides much fodder for the eye and the mind. Come with both open.

An architecture firm in Cayce, on State Street between the Lizard’s Thicket and the railroad switching yard isn’t the place most people go looking for art shows. Especially good art shows. Although the exhibitions at Compass 5 are in a working office, they are still well displayed, but more importantly the art is good.

Owner Maryellyn Cannizzaro has sought out excellent and edgy artists. These are by and large artists from Columbia who are well-known and respected – but only by a small group of art aficionados. (Shows are coming from Suzy Scarborough and John Monteith among others.)

With about six shows a year and a rapid change-over of shows Compass 5 is adding a much needed edge to the local art scene.

AT 10:29 AM POSTED BY CAROLINA CULTURE BY JEFFREY DAY